History Of The Whitsunday Islands

The Ngaro people were known for their three-piece canoes (winta) crafted from ironbark trees. Their diet consisted of sea turtles and fish as well as flying foxes and local berries and fruits. Records show the Ngaro also hunted sea mammals like small whales from these canoes. Making this possible was the barbed harpoons that were thrown from their kayaks.

By 1870 Warfare and disease along with the Native Police Corps made their lives extremely difficult, their final downfall came when they were removed by force to Palm Island and Brampton Island to work in timber mills. 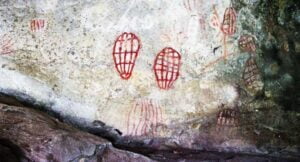 On the 4th of June year 1770,  Captain James Cook on the HMS Endeavour was the first European to discover the Whitsunday Islands by sailing through the Whitsunday passage. Captain Cook made particular note of the outrigger canoes used by the local Ngaro people. During his time Captain Cook made essential discoveries and named islands and bays. Further North of the Whitsundays, the HMS Endeavour, ran aground on a coral week and had to limp to a coastal river for a repair that took seven weeks.

Later in the 1700s Captain William Brampton passed through the area in 1793  followed by Captain Campbell on the Deptford in 1797 and Captain Swan on the Eliza in 1798, unfortunately, any observations these explorers made have never been located.

In 1843 Captain Blackwood of the Fly spent a month at Port Bowen and Molle island examining their potential as harbours. Jukes (1847: Vol 1:22-51). the ship’s botanist met with Aborigines on a number of occasions but provided few useful descriptions of them. However, the artist on board, Edwin Augustus Porcher has provided interesting evidence in the form of a water colour painting of a single outrigger canoe at Cape Hillsborough. ( below) giving us a great insight to the history of the Whitsunday Islands. 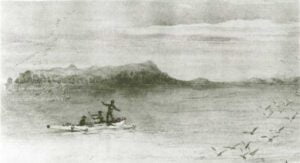 It took around 100 years for the first European settlers to arrive in the area, they were met with stiff opposition from the local Ngaro people. during the next 50 -60 years the islands were mainly used for sheep farming and a few small timber mills.

Whitehaven Beach was discovered in 1879 by Staff Commander EP Bedwell, but it wasn’t until the late 1900s did it become a popular tourist attraction. Hence the beach is relatively untouched by history leaving us with a destination that has looked this way for thousands of years

Commencement Of Island Resorts Being Built

Tourism first started in 1923 when Angus Nicholson began a small lodge for visitors on Lindeman Island, from here it took time but later in the 1900s, the Whitsunday islands resorts became a tourist boom. Opening Dates on these resorts are as follows

Hamilton Island Resort started being built in the early 1980s

Daydream Island – Started as early as 1932  Paddy and Connie Murray who bought the island in 1932 for two hundred pounds, erecting six tin sheds for accommodation and renaming it Day Dream after their yacht.

Long Island Resort – The resort was originally developed by the tourism company Contiki in the mid-1980s.

More to come on the History of the Whitsunday Islands