If you are planning a camping trip to the Whitsunday Islands, you will find some tasty BBQ recipes for camping on Whitehaven Beach and other camping locations below.

The crystal clear salt waters and pristine white sands of this beautiful location make it the perfect campsite situated in the Whitsunday Islands. And what better way to enjoy the great outdoors than by cooking up some delicious meals around the BBQ?

Here are some tasty camping recipes that are sure to be a hit on your Whitehaven Beach camping trip. 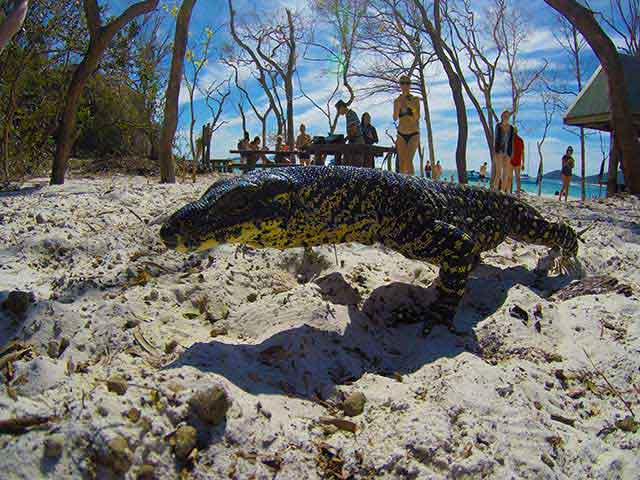 Prawns and vegetables are a classic combination that’s perfect for cooking over a BBQ. To make this dish, simply skewer your favourite vegetables (such as bell peppers, onions, mushrooms, and cherry tomatoes) and some large peeled prawns. Season the skewers with a mixture of olive oil, garlic, and your favourite herbs, then grill over the BBQ until the prawns are pink and the vegetables are tender. Serve with a squeeze of lemon juice and a side of bread to soak up all the delicious flavours.

Nachos are a crowd-pleasing snack that’s easy to make over the campfire. To start place a layer of tortilla chips in a large foil-lined pan, and top with a mixture of grated cheese, black beans and diced tomatoes. Put the pan over the BBQ, and let the cheese melt and the nachos get crispy. Once the nachos are hot and gooey, remove them from the fire and serve with some salsa, guacamole, and sour cream on the side. YUM!

Damper is a traditional Australian bread that’s cooked over the campfire or BBQ, and it’s the perfect accompaniment to any outdoor meal. To make a damper, start by mixing together some flour, baking powder, salt, and milk in a large bowl. Knead the dough into a ball, and pat it into a round shape. Place the damper on a piece of foil, and wrap it up tightly. Place the foil-wrapped damper directly on the BBQ at low heat, and let it cook for about 15 minutes, or until it’s cooked through and slightly crusty on the outside. Serve the damper warm, with some butter and honey on top.

Pork ribs are my BBQ favourite and the best BBQ recipes for camping on Whitehaven Beach, and they’re easy to make on the grill. To start, season the ribs with a mixture of brown sugar, paprika, garlic powder and your favourite BBQ sauce. Place the ribs on the grill, and let them cook for about 30 minutes or until they’re tender and falling off the bone. Brush the ribs with more BBQ sauce as they cook, and serve with a side of coleslaw and corn on the cob.

Lamb is a popular meat in Australia, and lamb chops are a tasty and versatile cut that’s perfect for the BBQ. To make this dish, season the lamb chops with a mixture of olive oil, garlic, and your favourite herbs (such as rosemary and mint). Grill the lamb chops on the BBQ until they are cooked to your desired level, and serve with a side of grilled vegetables and some quinoa salad.

Snapper is a delicious and flaky fish that’s perfect for grilling on the BBQ. To make this dish, start by marinating the snapper in a mixture of olive oil, lemon juice, garlic, and your favourite herbs (such as parsley and dill). Grill the snapper on the BBQ until it’s cooked through and the skin is crispy, and serve with a side of grilled vegetables and some lemon wedges on the side.

Grilled pineapple is a delicious and healthy dessert that’s easy to make on the BBQ. To start, slice a fresh pineapple into rounds, and brush them with a mixture of melted butter, brown sugar, and cinnamon. Put the pineapple on the grill, and let it cook for about 5 minutes on each side, or until it’s caramelized and slightly browned. Serve the grilled pineapple with a scoop of vanilla ice cream on top, and a drizzle of honey.

When camping in the Whitsundays cooking is essential as there are no shops on most Islands, so it’s important to follow safety guidelines to ensure that your cooking experience is safe and legal.

See some tips below for using a BBQ on Whitehaven Beach

By following these above tips you can enjoy a safe cooking experience on Whitehaven Beach. Happy camping!

Hi my name is Nath J.
I have lived and worked in Airlie Beach and Whitsundays since 2001. Over these 21 years I spent 19 of them in the local tourism industry, Including owning a travel store, working on overnight and day boats, plus sales and marketing for local business. The content on this page is taken from my knowledge of the tourism industry and hopefully provide you with the facts about Airlie Beach and the Whitsundays you were looking for.